Are you using flammable solvents for vapour degreasing?

Welcome to the crazy world of the European Union regulators who have devised a new test which demonstrates Trichloroethylene has a flash point of 24 degrees Centigrade (about the ambient temperature in a factory building). In your vapour degreasing tank it is heated to 87 Degrees Centigrade to produce a vapour. Why then does the tank not catch light and explode each time the equipment is used?

The explanation is simple. Halogenated solvents, i.e. those containing chlorine, bromine and fluorine do not have a flash point in the real world when using approved test equipment to International ASTM, ISO and DIN standards. These solvents are non flammable at any temperature and do not support combustion, which is why they are used safely for degreasing in thousands of vapour degreasing tanks all over the world.

To meet a political agenda the “experts”, denizens of the secretive and shadowy world of the European Union chemical classification working groups, have decided to tear up the standards and rewrite the protocols to prove that one solvent, n-Propyl Bromide (nPB) has a flash point of – (yes minus)10 Degrees Centigrade which allows them to classify this solvent as H225 – highly flammable liquid and vapour. In effect this should prevent the use of nPB for vapour degreasing. This classification also increases costs of transport and insurance for the solvent, an added bonus for the regulators scheme.

But the biter then is bit and the laws of unexpected consequences come into effect. In trials sponsored by Enviro Tech Europe Limited, suppliers of EnSolv precision cleaning solvent based on n-Propyl Bromide, using the same test protocols, devised by the working group “experts”, all the halogenated solvents offered in the European market are shown to be flammable. 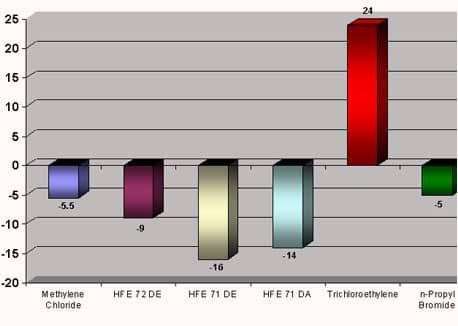 All temperatures in Degrees Centigrade

None of these solvents listed with minus temperatures will be practically used at below zero temperatures, so even in the unreal world of the regulators they will be safe in use. But the exception, Trichloroethylene, will flash at ambient temperatures (according to the invalid test approved by the working group), so in their terms is extremely dangerous and should be in urgent need of reclassification.

In reality the flash points found above are all invalid since they are merely flame enhancement which should be discounted. The pseudo-flash point is only found at that specific temperature and not below or above up to the boiling point.

Is this disconcerting or embarrassing to the regulators who have now effectively removed the most cost effective and widely used method of cleaning from use in industry?
No! They just decided not to reclassify the other products, all of which exhibit exactly the same characteristics as n-Propyl Bromide

The regulators exist to ensure that chemicals used in Europe are properly classified and labelled so that they can be safely used and properly compared. Despite several requests to the Health and Safety Executive, for a review of the methods of testing and classifying of halogenated solvents, this has been refused by the HSE representative to the working group. Hence only n-Propyl Bromide is properly (or improperly classified) as highly flammable.

Why is only n-Propyl Bromide targeted?

Is it because the use of this material, a perfect substitute for Trichloroethylene (a classified carcinogen) is a threat to the established order? You will have your own opinion.

As users you have to make decisions on substitution of Trichloroethylene to comply with the Solvent Emissions Directive (SED) unless there is no technically equivalent product. Formulated n-Propyl Bromide based vapour degreasing solvents, such as the patented EnSolv product range, are an excellent substitute and the only viable alternative drop in replacements, cost effective and with the same efficiency in use. Despite the agenda of the regulators that results in an avalanche of ill considered EU Directives, independent results confirm the invalid classification for nPB. This confirms all the benefits of EnSolv are available without the flammable classification or labelling and can be used as a safe and simple substitute for Trichloroethylene.

We have independently tested the flammability of EnSolv and test reports show that it does not have a flash point and is non flammable. We have test reports available on request

The flash point determinations used in this article were produced by Chilworth Technology Ltd, a Good Practice Laboratory specialising in flammability and risk management.

The tests use the protocols accepted by the classification working group using ISO 1523 with a Pensky Martens closed cup as described in ISO 2719 (1988). The findings of a flash point for n-Propyl Bromide and the other solvents are however not valid outside the temperature range +10 to +110 Centigrade as specified in the ISO1523 standard.

Alternative test equipment is available detailed in ISO 1523 which are valid at temperatures down to -30C (including Abel, Tag and Abel-Pensky). At least two of these were used by the working group “expert” and yielded no determinable flash point.

The full text of the report by Chilworth Technology with detailed test procedures and an independent expert critique of the results and conclusions are available on request to:
[email protected]

The answer is YES, if you use Trichloroethylene or any of the other commonly used vapour degreasing solvents.