CONTENT ON THIS PAGE IS RETAINED FOR INFORMATION ONLY

EnviroTech Europe Ltd (ETE) continue to publish it as historical information and to record changes occurring in legislation which have affected decisions on formulations and equipment used in vapour degreasing - the most effective, quickest, flexible and cheapest cleaning system used in industry.

EnSolv® invented and patented by EnviroTech has been a market leader all over the world for vapour degreasing. It is based on n-bromopropane (nPB) which now cannot be used as a vapour degreaser within the UK or EU without authorisation.

Archived information about EnSolv®  can be found using the Discontinued Products & Resources navigation menu on this page.

Using experience accumulated over 40 years supplying and supporting users of the vapour degreasing process ETE specialists have developed “drop in” alternatives:
ProSolv®, ProSolv5408e®  and EnSolv CC-A® give the same or improved level of performance and economy as the original EnSolv® products.

Please contact our advisers who are available to discuss your needs and propose the best replacement product.

Or please click here to return to our vapour degreasing products homepage for information about our current products.

On 28th June 2011 DuPont held a webinar to sell the advantages of Vertrel Speciality fluids and in particular as replacement or alternative for n-Propyl Bromide (nPB). EnSolv precision cleaning solvent is based on nPB and is the fastest growing most effective economical alternative to the carcinogen trichloroethylene.

Envirotech Europe Ltd (ETE) manufacturers of EnSolv were not invited to join the webinar nor were any representatives or distributors of EnSolv.

Larry Clark President of ETE did receive an invitation and joined the discussions with about 30 other people which included 6 or 7 representatives of DuPont, a Vertrel distributor and an equipment manufacturer . Many of the statements made by the speakers were misrepresentations of facts unsupported by any evidence.

After the webinar was completed participants were asked for questions. Larry Clark submitted a list. He was immediately excluded from the discussions without any of the questions being addressed then or since. After reminders to Mr. Blanchard and 5 months waiting for answers we have had no success in obtaining a response. We understand why and believe that as users or potential users of Vertrel you will be interested to read our detailed analysis of the webinar for a more balanced picture for you to sort fact from fiction and hyperbole.

The first 5 slides are given by Ken Blanchard DuPont Sales Manager for Vertrel Speciality Fluids suggesting they can be used as an alternative to nPB based solvents. We question many of his statements and present the facts when compared to EnSolv a patented stablilised n-propyl bromide cleaning solvent. 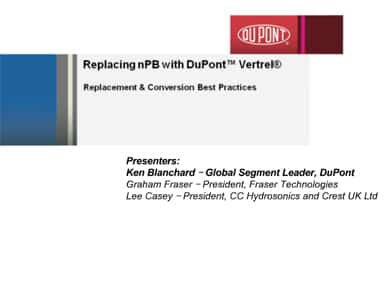 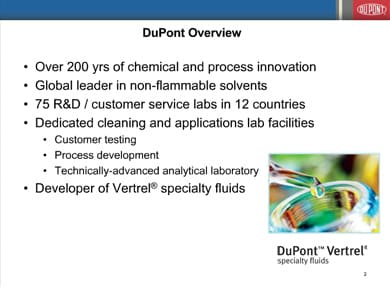 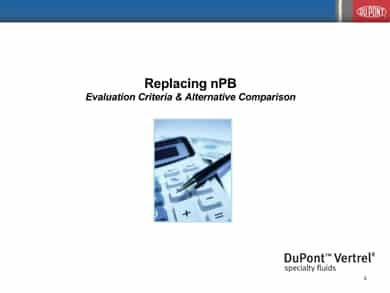 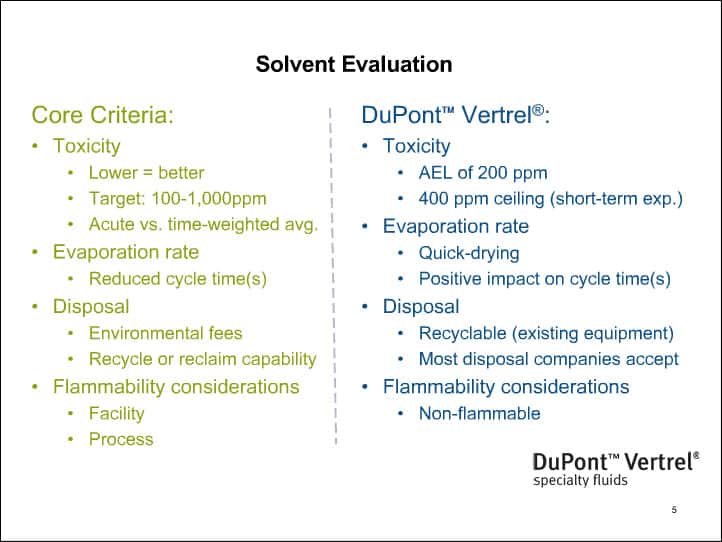 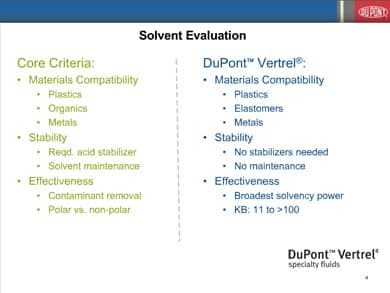 Vertrel Speciality Fluids SDG and SFR promoted as nPB replacements are in fact solvent mixtures  trans-1,2 dichloroethylene (t-DCE which is a halogenated hydrocarbon belongs in the same family as the carcinogenic trichloroethylene) and 1,1 dichloroethylene. The t-DCE accounts for the majority of the solvent blend (typically 50-80%). T-DCE is a highly flammable liquid with a flash point of 2°C. The KB value is 117. HFC solvents are added only to suppress the flash point but they also reduce the KB value significantly to 95 for SDG and significantly increase the cost. The boiling point of t-DCE is 48°C and Vertrel SDG is 42°C. Vertrel SDG has published flammability limits of 7-14% in air which means that it has a flash point under certain conditions.

EnSolv® is a simple patented formulation based on a single solvent, n-Propyl Bromide, with a small percentage of which form an azeotropic which does not change during use. It has no flash point when tested to the appropriate International standards and is not flammable under normal conditions of use as a degreasing solvent. The temperature of EnSolv® is 70C giving wide temperature difference between ambient temperature and the temperature which ensures excellent condensation cleaning, comfortable handling conditions for operators with very economical operating costs. Vapour degreasing is the fastest and simplest process which can be used in standard equipment.

This is to be compared with the Vertrel solvent mixtures which cannot be used for consistent quality degreasing due to the low boiling point and which will need more expensive equipment with immersion and ultrasonics to achieve the same results.

Statements by Blanchard regarding the cleaning standards and economics for using Vertrel solvent mixtures cannot be justified without independent testing of identical components in identical machines. No evidence is available that any tests have been carried out. Figures from equipment manufacturers cannot be considered as independent as the use of Vertrel solvent mixtures needs much more expensive and complicated machines which are more profitable than the simple machines used with EnSolv®.

Until documented test results can be produced the information supplied by the proponents of Vertrel solvent mixtures must be very carefully evaluated and practical testing initiated.

Slide 5 (above)
The high vapour pressure of Vertrel SDG means that it is more volatile than nPB and it will be more difficult to control airborne levels of solvent. The exposure limit quoted for Vertrel SDG may sound safer but it is easier to control nPB based EnSolv to less than 100ppm LTEL recommended by the manufacturers than Vertrel to less than 200ppm. This must be taken into account in any risk assessment concerning human exposure.

Using EnSolv® solvent levels around conventional vapour degreasing machines demonstrate levels averaging 10ppm. The claim of faster cycle times for Vertrel SDG are possible since the window for vapour degreasing is only ambient to 42°C (say 23C to 42C = 19C effective ) instead of 48C effective for EnSolv®. However components will reach the equilibrium temperature very quickly with Vertrel . Once parts reach this equilibrium temperature no condensate is produced and they are no longer being cleaned. The reduced cycle time and reduced solvency may not be enough to clean the components by vapour degreasing and more expensive solvent immersion machine possibly with ultrasonics will be needed with longer cycle times to give the same level of cleaning as simple vapour degreasing with EnSolv®. Comparative testing is the only way to prove which is appropriate for the task. 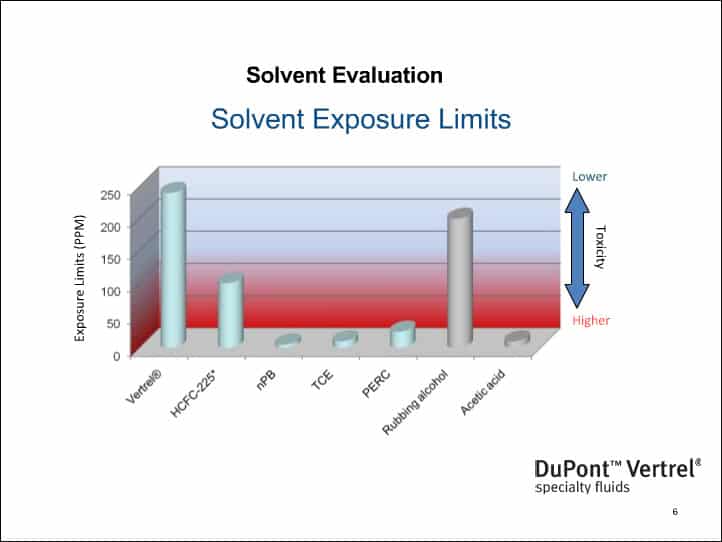 Slide 6 (above)
Trans 1 ,2 dichloroethylene exposure limits in UK are 200ppm LTEL and 250STEL there is no official exposure limit for nPB in Europe or the USA. The slide shows 250ppm for Vertrel SDG and 10ppm for nPB, a number suggested by ACGIH an industry body dominated by major chemical companies. This figure is not accepted by any authority including the US EPA who propose 25ppm under normal conditions of use, however this also is not an official figure as only OSHA can set exposure standards in the US.

The manufacturers of EnSolv® commissioned leading authorities to examine the very large database of exposure studies for nPB and their work clearly demonstrates that an LTEL of 100ppm offers complete safety for personnel.

Most simple vapour degreasers can control emissions of nPB to less than 25ppm using lip extraction. This is not feasible with Vertrel because solvent losses will accelerate, leading to very high consumption and prohibitive cost. It is always necessary to consider the cost of the extremely expensive and complicated machines, and amortise this into the operating costs. 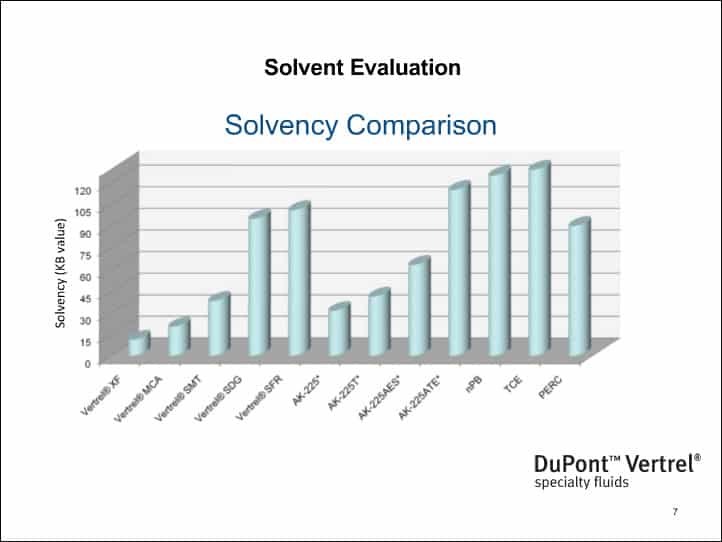 Slide 7 (above)
EnSolv® stabilised and patented n-propyl bromide based precision cleaning solvent is a “drop in” replacement for trichloroethylene, the most widely used solvent for vapour degreasing. 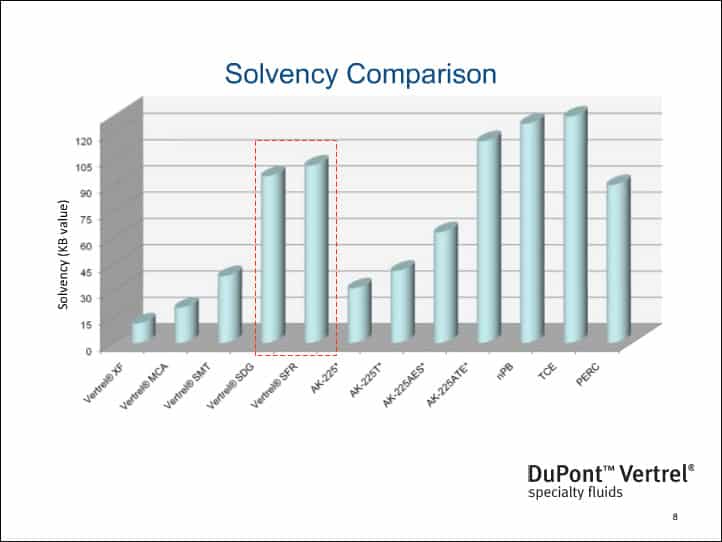 Slide 8 (above)
The solvent power (KB value) of Vertrel SDG and SFR are close to the figure for EnSolv® but with such low boiling points the equilibrium temperature when condensation ceases is too low to offer sufficient exposure to the liquid solvent to give effective cleaning by the standard vapour degreasing process. 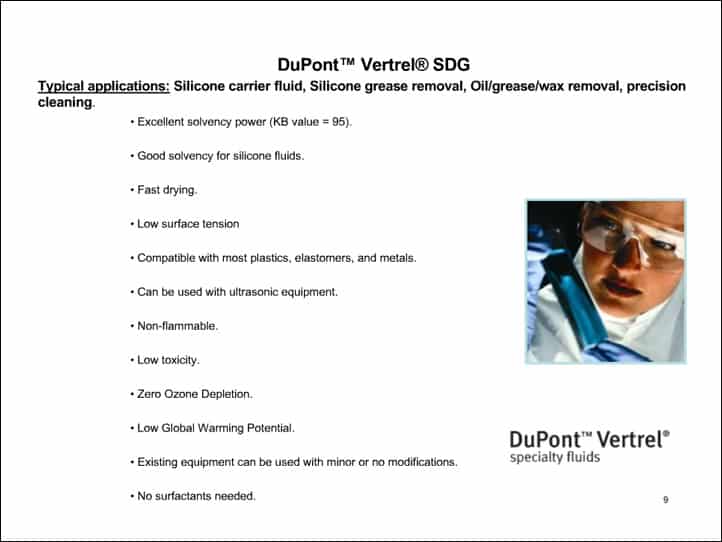 Slide 9 (above)
Vertrel SDG offers no benefits compared to EnSolv® in cleaning standards and despite the claims in slide 9 (above) it cannot be used in existing equipment as a drop in replacement for trichloroethylene.

Global Warming Potential (GWP) of Vertrel SDG is claimed by Dupont to be low at 148 compared to the datum carbon dioxide as 1. EnSolv® is calculated to be 1.57 (U.S. EPA SNAP approval for nPB) this is nearly 100 times less than Vertrel and a considerably lower threat to the environment.

The Ozone Depletion Potential (ODP) of Vertrel is stated by Dupont to be 0. EnSolv® (calculated as nPB) has a fully authenticated ODP of 0.005 with a short atmospheric lifetime of 24.7 days for emissions from 30 to 60 degrees North ( where most industry is located). This is insignificant in global terms.

VERTREL is a tradename of DuPont Nemours.
All copyrights are acknowledged.